Veteran wargame reviewer M. Evan Brooks sums it up succinctly in his synopsis of this marginal game: "Released to tie-in with the four-hour Turner movie, this simulation was a workmanlike albeit simplistic product. In solitaire mode, the user could access both sides (!) and artillery fire had to be adjusted to a degree inconsistent with the remainder of the program. The CD version offered clips from the movie, and the product was an excellent tutorial for educational purposes if not for gameplaying. In fact, as gameplay goes, it didn't." 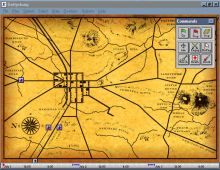 People who downloaded this game have also downloaded:
American Civil War: From Sumter To Appomattox, Balance of Power (1990 edition), Great Naval Battles 5, Back to Baghdad