One of the most obscure car-related games ever made, Gearhead Garage is an interesting 'game' that is actually less interesting than it sounds. Like the semi-popular toy line it was based on, the goal in Gearhead Garage is to fix up cars brought to you by various customers in return for money. In the later stages of the game, you can spend the money you earn on auctioning broken cars, fix them, and then selling them on for profit.

For each car, there are three areas that you have to fix: the body, the engine, and the gear. You often have to visit the junkyard or car catalogue to buy new parts, but you can also sell parts you don't need to the junkyard. The game's decend 3D models lets you view the car from every angle, although it is sometimes difficult to fit the parts exactly.

Overall, I find Gearhead Garage quite interesting at first, but the lack of variety in cars and limited gameplay make it boring and repetitive after the first few missions. If you are a car fanatic who loves tinkering with cars such as Bronco and Escort, you might find Gearhead Garage fun enough to play all the way to the end. The rest of us would do well to stick to the simple-yet-fun Car Builder instead. 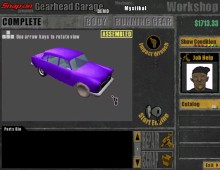