The first World War II submarine simulation ever made for the PC, GATO was a true pioneer in this niche genre, an ambitious sim that features a lot of realistic instruments and weapons. As the submarine history page at Subsim.com describes it: "This was the first sub simulator for a personal computer. The graphics were very limited, CGA with stick figures for ships, of which there were five enemy types. Although it simulated GATO class subs, there were only four bow torpedo tubes available. All functions were generated by the keyboard (mouse? what's a mouse?). The mission area was very limited--a group of islands in the Pacific, which was subdivided into 20 "quadrants". You pressed the "M" key for new missions and they were transmitted by Morse code. You were instructed to keep in mind "the enemy may break Allied code at some point. Some messages may be enemy fakes designed to trap you." How's that for early efforts at realism? Resource management was one of the game's subtler features. Your primary strategic objective was to complete as many missions as possible with the supplies you carry before returning to the quadrant where your subtender waits.

Gato was the Pong of submarine simulations. When the first players encountered Gato, you can imagine they thought it was pretty significant. They had to start somewhere." True enough. Primitive, but honorable for the pioneer that it was. 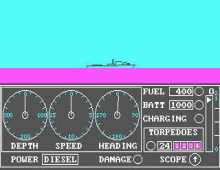