Firestorm: Thunderhawk 2 is a fun "light" chopper simulation from Core Design that is reminiscent of NovaLogic's Comanche series in many ways. Namely, it's a fast-paced action game that shouldn't be mistaken for the next complex sim like Apache Longbow.

The AH-73M Thunderhawk Attack Helicopter that you control in Firestorm is part of an all-helicopter task force code-named 'Firestorm' created by NATO, to respond to urgent crisis situations. You are 'Firestorm One', the lead pilot of this elite force. The game includes eight long campaigns, each with a wide variety of enemies, ranging from pirates in the South China Sea, Serbian forces blocking a humanitarian convoy, Iraqi troops invading Jordan, and even Columbian drugs cartels. You can start the campaigns in any order you want, but you will have to finish all the missions in one before you can begin another.

As in similar games, you will briefed before each mission, with a clearly marked map that indicates the location of enemy forces and targets. The missions are nicely varied: in addition to the usual locate and destroy missions, you will be sent to defend a NATO base or free a passenger ship from the clutches of modern pirates. To accomplish your tasks, your copter will be equipped to the teeth, from the standard 30mm chain gun, to heavy-duty missiles (homing and anti-shipping), 3 kinds of bombs, and rockets. By default, you will be given a weapons selection that is adequate for that particular mission, although you can always change it.

The graphics are quite impressive -the landscape is fully textured 3D graphics, with 2D graphics for the background—although they are not as smooth as NovaLogic's games. Buildings, enemy forces, and other moving objects are also represented in 3D, which makes the environment quite realistic even though the game only uses the standard VGA resolution. The usual range of views is available, from the invisible cockpit mode to external cameras. The controls are as easy as with any first person action game, and you can play with the keyboard, mouse or joystick. As in the more traditional flight combat simulators, you can lock your weapons on targets and fire at will. When you destroy a target, it will blow away with debris and multiple explosions, leaving blast-scorched areas on the ground and blackened wreckage. You will even see the soldiers running away when the tanks explode—and you can even kill these if you lower your altitude and shoot in their direction ;)

With a lot of details, fun missions, and a user-friendly interface, Firehawk is a lot of fun for action gamers or casual flight sim fans who want a bit of realism thrown in, or die-hard armchair pilots who want an arcade-style sim for a change. Recommended! 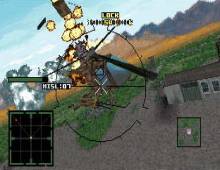