Although it is really a flight simulation, Blue Angels' focus on the exciting world of air shows makes it closer to a sports game than a flight sim. Instead of shooting downs MIGs or make bomb runs as in other flight sims, here you perform over 25 actual air show maneuvers with your famed acrobatic squadron the Blue Angels. Unfortunately the flight dynamics were almost non existent; for example, turning off the engine would bring the plane to a halt, some distance from the ground, and the aircraft could be rotated around it's axis. However, the game's great camera angles and graphics help cover this eggregrious fault. It also had digitised speech, which played through the PC speaker (The pilot in command would shout `Break! Break!' if you flew the pattern too poorly). Overall, a fun game for flight sim beginners who aren't too concerned with realism in their games-- definitely not for ace pilots. 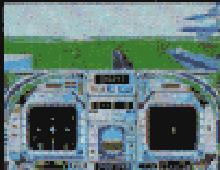