This is a simulator of the F/A-18 Hornet aircraft. The Flight model is relaxed, so it?s easy to get into. The graphics are VGA, but they won't surprise you a bit. There are several scenarios and a campaign mode. The sounds are good, but unexceptional. This game failed to hit the spotlights by being marketed as shareware, receiving little publicity, and having no really original features. However, it?s good for a quick blast and fun to play (there?s great fun to be had with rockets). All in all, a decent sim which didn't win any awards for originality, but worthy of checking out, as there are no real problems impairing gameplay.

Recent games which might suit people who like this game are Hornet 3.0 and Hornet Korea, which made their debut on the Mac a few years ago, Jane's F/A-18, and Digital Integration's Super Hornet. You can download F/A-18 Korea from this very site. 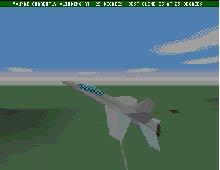