The third Paragon game is set in a fantasy world of wizards vying for power. It's based on pretty much the same primitive engine used in Alien Fires 2199 AD, but this time gameplay is a bit improved, as winning combat takes some skills (e.g. choosing spells to cast) although the randomness is still a factor.

The plot: you are wizard Temeres, whose tasks are to reunite the White Unicorn with the Black Unicorn to restore the cosmic balance, and defeat evil wizard Aldorin in a magical combat. The game boasts over 50 fantastic creatures to encounter, 85 magical objects to collect, 3 dimensions, and over 30 exciting enchanted kingdoms to explore. Despite this large gameworld, however, most encounters are resolved in a seemingly random person. The manual touts a "sophisticated combat generation factoring in time of day, weapons, armor, strength and magic spells," but either the game engine fails to do that or else those factors are hidden very well from the player, because I won most combats very easily. Last but not least, the game has a very atrocious 3D maze which you must carefully map. Overall, Wizard Wars could have been a much better game had the designers spend more time with user interface and balancing out game mechanics. The best thing about the game is the cool freebies that came in the box: a very nice wizard's spell book and magical pouch (similar to the one included in Infocom's Journey box). Overall, it's a well-conceived game that wasn't so well executed. 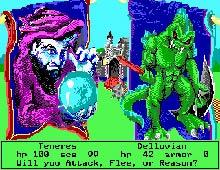