A little-known Japanese import similar to Psychic War (also from Broderbund) in the cute anime style and console-influenced gameplay, Wibarm is notable for a wide variety of gameplay options. In this futuristic sci-fi game, you control a robot that can transform into a spacecraft a la Thexder, fight hordes of aliens in cool 3D indoors and 2D outdoors. Great fun, although probably too simplistic for hard-core RPGers. 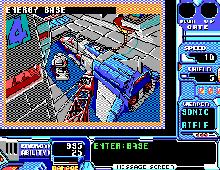 People who downloaded this game have also downloaded:
Vengeance of The Excalibur, Warriors of Legend, Ultima Underworld: The Stygian Abyss, Wasteland, Whale's Voyage