The Valley and The Tomb of Drewan are two excellent remakes of classic Vic-20 games that were first released over 20 years ago. Similar to early Roguelikes, the gameplay in both games are fairly simple, consisting of a lot of exploration, treasure-hunting, and combat. Your goal in The Valley is to find the legendary Helm of Evanna, for which you need to find the Amulet of Alarian and six Amulet stones, while in The Tomb of Drewan it is to destroy the Tomb of Drewan by entering it and find the stones with which you can destroy it. Both games are played from a 2D, top-down perspective.

The Valley is a more simple game of the two: there are no magic treasures, armor, or even shops. Fighting involves selecting a spell (out of three), or selecting a target area on the body of the monster. In The Tomb of Drewan, character stats are more detailed and influential to gameplay - for instance, your strength value limits the weight of items you can carry. You will also find a greater variety of weapons than The Valley, and each magical stone you find grants special powers. For example, the Air Stone of N'gar will give you unlimited strength, so that you can carry around a lot of gold without having to slow down. In both games, you will battle numerous enemies, and gain higher stats in the process.

In terms of gameworld, The Valley makes up for its simple gameplay mechanics by a more interesting and diverse range of terrain. You will explore safe castles (which are also save points), swamps, forests, the Black Tower of Zaexon, Vounim's Lair, and the Temple of Y'Naigoth. In The Tomb of Drewan, you can only explore the tomb itself, but each level is huge and filled with many new treasures to find.

If you are interested in how fun early Roguelikes can be, both games are well worth your time. They are not as classic as the original Rogue or Sword of Fargoal, but they are a cut above the average RPGs of the bygone era when probably only a few dozen programmers worldwide knew what a PC look like ;) Both remakes, programmed by Paul Robson, are very faithful to the original games. The author has also generously put up source codes, so if you know how to program and want to improve them in some way, you definitely can. 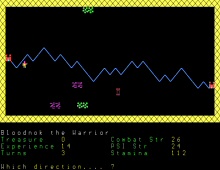 People who downloaded this game have also downloaded:
Wasteland, Vengeance of The Excalibur, Zelda Classic, War of the Lance, Ultima Underworld: The Stygian Abyss