Ultimuh is a great parody of a certain hit RPG series whose name should be all too familiar to you by now if you haven't been living under a rock for the past 15 years ;) The game pokes fun of Origin's classic in many ways, particularly the 8-level/world premise, the "Ye Olde English" language, and many other elements that will be familiar to fans of the series. Although more of a short parody or gag than a real game, Ultimuh does feature random monsters, meaning no two games will be exactly alike. If you love the classics, Ultimuh will bring at least a chuckle to your face ;) 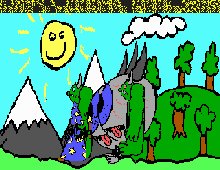