A very interesting Gauntlet clone, Time Bandit offers fun arcade action but also has some puzzle, action adventure, and even some simple text-adventure elements scattered over the 16 lands and over 240 levels. The game description from MobyGames puts it quite succinctly thus:

"Having nothing to do with the Terry Gilliam movie Time Bandits, this game utilises the time-travel theme for a fast-paced variation on the good old Gauntlet concept. Your bandit visits 16 different worlds throughout time to grab as much loot as possible and, in the long run, do some universe-saving stuff as well. Each of the 16 locations -- featuring such varied places like a medieval arena, a bomb factory, a wrecked spaceship and a ghost town -- is basically a labyrinth filled with treasure and -- you guessed it -- monsters. You've got to dodge these or blast them with your weapon, while collecting keys, opening doors and searching for the exit. Although theoretically each location consists of 16 sub-levels, these are merely the basic layout flipped or mirrored, some items redistributed and the monster speed increased. After completing a level, you return to the world map, where you may freely choose the next challenge (nice) and save your game (very nice).

Interestingly, Time Bandit tries to spice up the fast arcade action with text adventure scenes. Due to this strange mixture, you will occasionally bump into persons or computer consoles with which interaction is possible. For example, you've got to explore and repair the damaged spaceship Excalibur. However, the parser is crude at best; you'll have to know exactly what to do, or else you will trigger no reaction.

Gaming veterans will discover a score of elements of and allusions to arcade classics, such as Gauntlet (obviously), Pac-Man, Centipede, Bomberman, and others."

Overall, Time Bandit is an intriguing genre-busting game whose whole is definitely greater than the sum of its parts. I've decided to put it in the RPG genre because that's what the game's spirit is all about.

In this topdown action adventure you visit around 16 worlds in which you have to run through picking up stuff. Strange part of the game is that once in a while it becomes textadventurish. Overall, the gameplay is quite good and fast. 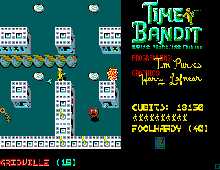 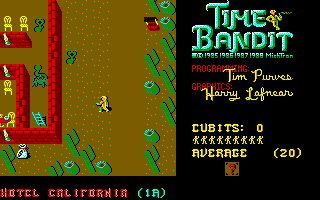