As one of the earliest role playing games, Telengard features only a few, prmitive features. Still, the game is quite fun to play... and hard!

You can play as only one character, a warrior/wizard rogue determined to kill a lot of monsters, gain powerful weapons and get rich. Enjoy in this pioneer product!

Telengard is one of the real early classics based on probably the first true dungeon crawler Rogue. You start Telengard by creating your character and once you are done with that you enter the first dungeon. While you can generate new stats for your character this is also the only thing you can do. Unlike today's roleplay games where you can select many things like class, alignment and race you can't select any of those things in Telengard.

Personally I didn't get very far most of the times I played this since it's very easy to die - especially in the beginning and it's also hard to get new items and gain higher levels. So if you meet a Goblin level 1 you should be able to win but you can also meet a lot tough monsters after just very little time so Telengard is highly unbalanced since you can pretty much only survive by running from the tough monsters all the time or just hope you will only meet the easy ones.

While the graphics are not impressive compared to today's games it won't matter to anyone as long as they are into roleplay games. Telengard must be one of the most simple roleplay games ever made but it's still very addictive and while I was just playing it again to remember a few more details about it again I still played it much longer than I had planed just because I had to kill that Minotaur that I was killed by earlier.

A nice little nostalgic RPG in tradition of Rogue. Not bad after all, you run through a dungeon, defeat monsters, find treasures and useful items. Can surely be fun for a while. The atmosphere is pretty good considering the fact that there aren't great graphics or anything like that. Telengard is worth a try for all RPG-Fans, maybe not so much for people who aren't much interested in that genre.

An early dungeon-crawl RPG, Avalon Hill's Telengard is among the first Roguelike games ever made for the PC. Since the original version (for the TRS-80 computer) came out way back in 1982, Telengard should be considered one of the grandaddies of Roguelike games.

Although the gameplay is extremely simple, Telengard is by no means easy. You'll die a lot before gaining a level, and new, better weapons are hard to come by. There is only one character class to play as-- a warrior/wizard combination, although you can re-roll the starting stats and cast spells during the game. Telengard features some neat ideas that became commonplace in Roguelikes, such as scrolls, and teleporters you can use to warp around the dungeon. All in all, a respectable dungeon hack that didn't set any standards, but probably inspired a lot of authors to program Roguelikes of their own. 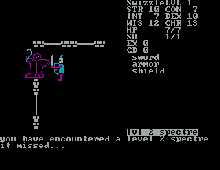