One of Origin's sub-par RPGs, Tangled Tales is a small, "light" RPG that tries too hard to introduce the genre to new gamers through dumbed-down combat, simplified statistics, and mundane plot. However, it's still a good introductory-level game that's charming in its own way. Just don't expect it to be another Ultima, and you'll be enjoying this one :) 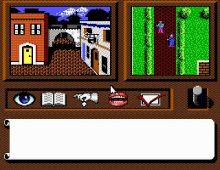 People who downloaded this game have also downloaded:
Knights of Legend, Times of Lore, Dungeons & Dragons: Warriors of the Eternal Sun, Knights of Xentar, Moonstone