One of the first Commodore 64 games, Sword of Fargoal is a classic Roguelike that was a considerable success for Epyx, although unfortunately the PC version was never made. The premise is quite straightforward: go down into the dungeon to retrieve the Sword of Fargoal - the only weapon that can vanquish the evil Umla. More details from the manual: "You are magically transported into the uppermost level of the dungeon with three things in your possession to aid in your quest: a short sword, a teleport spell, and a healing vial. Hope spurs you on to reach the place in the depths of the dungeon that conceals the magical Sword and to return with it to the stairs out of the mountain vault! The Sword of Fargoal is said to have been placed somewhere between the fifteenth and the twentieth level of the dungeon. If you find it, your quest only becomes more difficult. With the Sword in hand, Umla knows where you are! It would be only a matter of time before he destroys the entire dungeon. For this reason, once you find the goal to your quest, you only have 33 minutes to escape!"

The gameplay is typical Roguelike, played from a top-down perspective. You gain experience levels (resulting in higher hit points and battle skills) as you kill monsters, and finding new spells and magical items is key to success. The game introduced many features that have been superseded by newer Roguelikes like ADOM, but were very innovative for its time. For example, each level of the dungeon is randomly generated. Every time you enter a new level, you enter an entirely new layout with treasures, monsters, traps, gold, and the temple located in a new place. You can cast light spell to increases the radius of what you can see and reveal hidden Assassins. There are many kinds of monsters, some smarter than others. There are hidden treasures, and several kinds of traps. Once a Pit Trap has been sprung, you can use it as stairs to climb down to the next level. You can also bait stupid monsters to fall into the pit, if you timing is good enough. You can recuperate faster inside temples, which is also where you can offer some gold to the gods in order to gain experience points, The list of fun features in the game goes on and on.

Sword of Fargoal may not look like much now, but it was one of the great, largely forgotten milestones in Roguelike games. If you want a fun Roguelike that remains enjoyable more than a decade after its first release, check out this true pioneer in the genre. Sword of Fargoal is a lot of fun, and provides a great adrenaline rush when that countdown starts after you get the sword and must get the hell out ;) 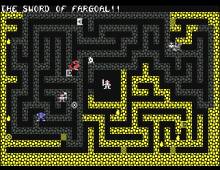 People who downloaded this game have also downloaded:
Sword of Fargoal Remake, The, Sundog: Frozen Legacy, Times of Lore, Treasures of the Savage Frontier, Rings of Power