Sword of Fargoal Remake, The

The Sword of Fargoal Remake is a superb remake of Sword of Fargoal, a classic Commodore 64 RPG that was never released on PC. The game is a very faithful recreation of the original classic, except the graphics is enhanced to take advantage of SVGA, and there are minor gameplay and interface tweaks to make the game more balanced and the controls more intuitive. Summary of the gameplay from my review the original is as follows:

"The gameplay is typical Roguelike, played from a top-down perspective. You gain experience levels (resulting in higher hit points and battle skills) as you kill monsters, and finding new spells and magical items is key to success. The game introduced many features that have been superseded by newer Roguelikes like ADOM, but were very innovative for its time. For example, each level of the dungeon is randomly generated. Every time you enter a new level, you enter an entirely new layout with treasures, monsters, traps, gold, and the temple located in a new place. You can cast light spell to increases the radius of what you can see and reveal hidden Assassins. There are many kinds of monsters, some smarter than others. There are hidden treasures, and several kinds of traps. Once a Pit Trap has been sprung, you can use it as stairs to climb down to the next level. You can also bait stupid monsters to fall into the pit, if you timing is good enough. You can recuperate faster inside temples, which is also where you can offer some gold to the gods in order to gain experience points, The list of fun features in the game goes on and on."

If you enjoyed the original Sword of Fargoal or like Roguelike games in general, you will definitely love this remake that is evidently a labor of love. The timing and monster behavior is so remarkably similar to the original game that it is uncanny. 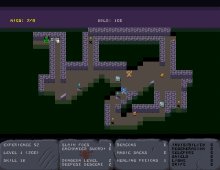 Sword of Fargoal Remake, The screenshot

People who downloaded this game have also downloaded:
Knights of Legend, Ultima Underworld: The Stygian Abyss, Dungeon Master, Vengeance of The Excalibur, Shadowcaster