The Spirit Engine is a superb freeware RPG/strategy game from Mark Pay of Natomic Studios. The game not only raises the bar for freeware games, but also introduces a unique (although not quite innovative) style of gameplay that fans of console-style RPGs will find refreshing. Similar to Square's much-overlooked Romancing SaGa series on the SNES, The Spirit Engine lets you assemble a party of three characters, each with his or her own characteristics and agenda that will change the outcome of certain events in the game. This makes the game highly replayable, especially since the story is well-crafted and the dialogues well-written. The "meta-plot" of the game goes as follows, according to the official blurb: "On a tiny island in a far-flung corner of a small world not unlike ours, an unfortunate mine worker buries his pickaxe in his last outcrop of rock between himself and the resting place of a timeless magical creature, awakening it rather earlier than his employers had intended in a terrible explosion of heat and light. Fleeing the clutches of those seeking it, the creature summons three individuals with great potential to its aid. Great potential, but rather few of the heroic traits required to rise to their epic task. Can this trio survive a trek across a hostile land, the machinations of an amoral corporation and an ancient cult and each other to protect the Spirit? Can some of them even be bothered? "

As to the gameplay itself, The Spirit Engine is played from a side-scrolling view much like a typical platformer. You talk to various NPCs, explore new areas, and fight battles - a *lot* of battles. Clearly the main focus of the game, the battle system in The Spirit Engine is similar to a game of rock-paper-scissors, wrapped up in RPG lingo. You choose what tactics to use before the battle commences, and then watch as the action unfolds. Since most battles are fairly difficult, the game requires a good dose of strategic thinking to succeed, making it more challenging than an average RPG.

The graphics in the game is outstanding; I have rarely seen better graphics in a game developed by amateur designers. The plot is also captivating enough to keep you glued to the screen (although a few cutscenes feel redundant). The quality of graphics, soundtrack, and unique gameplay combined make The Spirit Engine one of the highest quality freeware games ever made, and as a bonus it will take you quite a while to finish. Two thumbs up for the team at Natomic for the amazing game that could easily be a commercial title. 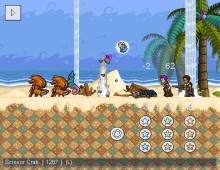