You ever heard them talk of the rogue-style games? Did you ever wonder what they mean by this? Well, in short words: Rogue was the first open ended ever changing RPG. Everytime you play it it comes up with a new dungeon. Your task is simply to stay alive for as long as possible, go deeper into the dungeon and collect as much gold as possible. On your way you meet monsters, find treasures, magical objects etc. This game comes along very simple but casts its spell on you immediately. You sit there trying to proceed further and further, building up your character to explore the next level and get some more gold.

This game is among the 5 or maybe 10 standard setting games ever made. Hundreds of games have been modelled after its concept. Millions of players all around the world have been playing it for years and years now. Although there have been MANY clones, enhanced versions and so on the classic still remains unreached in its simplicity and the ingenious idea. It's just pure roleplaying in this nice ASCII-environment (yes, I really prefer that as it underlines the spirit of the game). I could go on like this for ever, best is you just have a quick look at it - I guarantee you, if you're an RPG-fan it will be more - far more - than just a QUICK look!

The "granddaddy" of dungeon hack RPGs, Rogue has a long history that dates back to the 1970's. It was first released as a test application for UNIX, and quickly captured the imagination of popularity among system administrators and computer science students. It was such a popular "test" that enterprising UNIX admins and users distributed it, expanded it, imitated it, and ported it to their home computers.

The game's original concept was unique and rich enough that decades later, it has an entire genre of computer games named after it, commonly called "Roguelike Games", and today still attracts a loyal following and lively community and newsgroups.

What is so special about the game that it still attract gamers for over a decade? Many revoluationary features that have become the norm in today's RPGs. Rogue is an ASCII-interfaced (i.e. all text or text-charater based), turn-based, single player dungeon crawl. Its attraction lies neither in plot nor puzzles (both of which are paper-thin... you are a treasure hunter not unlike the Adventurer in Infocom's Zork), but in the seemingly endless combinations of features, a wide variety of monsters and loot, and randomly generated dungeon that guarantees infinite replayability. In short, Rogue is to RPGs what Crowther's mainframe Adventure is to adventures: a revolutionary game that spawned a genre. It may not stand the test of time very well after all these years, but for those who want to get a sense of where today's blockbuster dungeon crawls the likes of Diablo descend from, Rogue is it. 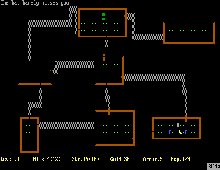 People who downloaded this game have also downloaded:
Rogue (Epyx), Pool of Radiance, Bard's Tale 1, Curse of the Azure Bonds, Eye of The Beholder 1