An awful game that practically spelled the end for Mike Singleton's long, illustrious career that began with Lords of Midnight for the Spectrum computer. Simply put, The Ring Cycle is basically the (incredibly buggy and flaws) Lords of Midnight 3 engine in new clothes. Even the intriguing world of Wagner's celebrated classical music masterpiece can't rescue the game from its unplayable mess.

As in Lords of Midnight, your goal in the game is to juggle both RPG and strategy elements. You will take on quests, which range from delivery errands to rescuing entire villages, as well as recruit followers to your cause and order them around to fulfill quests for you, etc. Like Lords of Midnight 3, it all sounds very good in theory until you discover how buggy and downright unplayable the game is. You would think Singleton and Psygnosis would take the time to fix the grandiose engine of LOM3 before using it for another game, but sadly that is not the case here. It seems as if The Ring Cycle is just a thinly-veiled attempt to milk the LOM3 engine (maybe before the gaming public realizes it) to compensate for poor sales of LOM3. Well, if things are broken and they aren't fixed, chances are they will remain broken. Read the review of LOM3 on this site for a full lowdown on what exactly is wrong with the game, and steer clear of The Ring Cycle. It's just old, rotten apple in a new barrel. No wonder the game quickly disappeared from store shelves and became one of Psygnosis' most obscure titles. Shame. 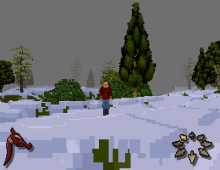 People who downloaded this game have also downloaded:
Romancing Sa-Ga 3, Monstania, Lord of The Rings 2: Two Towers, Lord of the Rings 1: Fellowship of the Ring, Obitus