Ragnarok (or Valhalla as some might know it) is a Rogue- like game with an early Ultima logic (for the uninitiated, Rogue is an ASCII-based open-ended dungeon crawl that was very popular since the early 1980s). You are a simple mortal, whose quest is to aid the old Norse gods in their battle against the evil gods (Ragnarok in Norse mythology is the final battle that would decide the fate of worlds). You start in a Viking village, and can choose to be a Viking warrior, blacksmith, woodsmith, rogue, sage, or a conjurer.

The game's strength is the virtually limitless replayability. All the items you are able to pick up, mix and use are almost unlimited. But the designer didn't stop there. The best feature in Ragnarok is that every time you start a new game, the map is different (the newer game Diablo by Blizzard Entertainment is also built up like this). Gameplay mechanics is simple, and the graphics is very primitive, but there are so many different ways to play that you will never get tired of it. You can have various powers and a wide variety of equipment. Overall, Ragnarok is truely one of the best, yet relatively unknown RPGs ever made. Best of all, the developers recently released the latest version as freeware.. unfortunately, the freeware version lacks sound effects which make the game much more atmospheric. You can therefore download Valhalla, the updated European release which *includes* music and sound effects, from the download link below :) 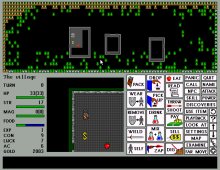