The "holy grail" of Infocom affionados, Quarterstaff: The Tomb of Setmoth is notorious for being the only Infocom game that was never made for the PC. It was instead released only on the Macintosh, which makes it extra hard to find anywhere (until now, that is). In the words of C.E. Forman, avid Infocom fan and proprietor of the one and only Ye Olde Infocom Shoppe store:

"Quarterstaff is based on a little-known earlier FRPG of the same title by Westwood Associates, who previously designed several titles for Infocom (e.g. Circuit's Edge). As an obscure collector's item, it's one of the best there is. But how is it as a game? The good news to all Infocom fans is that, although it's nowhere near the quality level reached by Infocom at their height, Quarterstaff is a fun RPG that combines windows and parser into an effective interface which is reminiscent of Magnetic Scrolls' interface used in their Collection 1 release. There are windows and menus for text, inventory, objects in the vicinity, optional graphics, maps, and an extensive on-line help and hint system. Infocom's famous parser is still around, and is up to their standards, although there is a few annoying twists -- non-cardinal directions such as northeast and southwest aren't understood, the "UNDO" command is absent, and some of the basic verbs have been altered (e.g. "REPEAT" is used instead of "AGAIN"). Also, somehow Infocom decided to drop many of the abbreviations that IF fans have come to take for granted. None of these quirks, however, is serious enough to hamper anyone's enjoyment of the game.

In traditional RPG style, the game puts you in control a party of adventurers (similar to Level 9's early The Hobbit). The party is split into "leader" and "followers," who can be ordered to follow the leader by typing cardinal directions. However, you need to type one command for each member if you want them to do anything specific. This, naturally, leads to a much longer play session. Special commands include "MIMIC" to imitate the leader; and "SPLIT" and "JOIN" to disband from the party and regroup, respectively.

Unlike most RPGs, Quarterstaff does not classify characters as fighters, thieves, magic users, etc. Rather, all characters are able to use every skill in the game to some extent, and their proficiencies continuously increase or decrease depending on experience. Similar to Origin's Ultima games, takeable items have such properties as size, shape, and weight, and NPCs wander about of their own accord (some will join your party). It's necessary to "WIELD" weapons before using them (a la Beyond Zork), and characters must also provide themselves with food, water, and sleep.

The writing is about average for Infocom, although Amy Briggs (Plundered Hearts designer) is credited with producing some of the text. As for puzzles, there simply aren't many in I-F sense. Your progress depends largely on discovering hidden objects and keys, unlocking doors, replenishing light sources, and opening secret passages. In most cases a little careful observation is all that's needed. Although the layout is fairly vast, there just isn't much variety, as the game is primarily combat-oriented ("ATTACK," "THROW," and "SHOOT" are used ad nauseum...though the "SMILE" command is kind of cute). The most significant "real" puzzle is that of deciphering a set of magic words using a parchment and wooden coin included in the game package. (Apparently quite a few players were stumped by this -- Infocom actually gave away the entire solution in the very last issue of "The Status Line," which is included in manual download below).

There is also one critical bug -- the game crashes your entire system if anything with nested objects (containers and NPCs holding items) is set on fire. On the plus side, you can't screw up the game completely unless your entire party is killed off."

All in all, Quarterstaff is really neat at the outset, but sooner or later the novelty wears off and it becomes rather tiresome to play through toward the end. Once you've played through, it's doubtful you'll feel much like experiencing it again. Although fun, Quarterstaff simply doesn't have the same play value as the all-text games. Recommended for Infocom fans, or any budding RPGer who don't mind some adventure game elements. 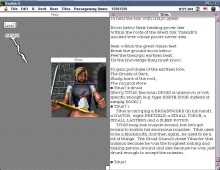 People who downloaded this game have also downloaded:
Lord of the Rings 1: Fellowship of the Ring, Prophecy of The Shadow, Knights of Legend, Betrayal At Krondor, Shadowcaster