Mission: Mainframe is a fun but very little known Roguelike RPG - released as public domain as far back as 1987. One of the first sci-fi Roguelikes ever made, the game casts you as a commando/secret agent/detective/private eye (you can choose who you want to be) sent into a highrise to find and defeat the mainframe-gone-crazy and get back to the lobby alive. The computer mainframe is located somewhere on floor 27-30 - similar to some Roguelikes, the levels in Mission: Mainframe are randomly generated so no two games will be exactly alike. Of course, before you can go up to floor 27-30, you must get past the employees who guard the elevator while trying to find the PASS KEY and SECURITY CLEARANCE that will give you access to the highest floors.

The gameplay is typical Roguelike, although the sci-fi elements mark a nice change from the usual dungeon romp. "Roll" your character to determine starting stats, then send him/her off into the complex. As your character battles 24 types of building employees and gains experience, his/her attributes will increase. Instead of chests, you will open "files," and instead of spells you will "use strategies," which can be found in the Library at the start of each game. The results of these strategies (which range from "Bluff" to "Flatter" and "Hypnotize") are often fun to watch.

In addition to the straightforward gameplay, there are also some tricks that you wouldn't find in other Roguelikes - some more annoying than fun. For instance, once in a while all the lights will go out and you will not be able to see at all. The only way to proceed is to light a match (obtained from employees you defeated) and fight the fuse box to turn the lights back on. But in general, though, Mission: Mainframe is a decent and fun Roguelike, although more weapon and enemy types as well as more unique floor designs (they all look the same after a while, just with different enemies) would have been nice. Recommended. 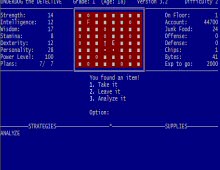 People who downloaded this game have also downloaded:
Rogue, Worlds of Ultima: Savage Empire, Defender of Boston, Personal Nightmare, Prophecy of The Shadow