Mines of Titan is a role-playing adventure set in the 22nd century on Saturn's moon, Titan. In this role-playing game, you create and control a party of characters exploring the moon-base Primus. You develop your characters by improving their attributes and by adding new skills. Undertaking special missions during the game allows your party to build up the money they will need for training and for buying more powerful weapons.

To win the game, you must discover why contact with they city of Proscenium has been cut off. Success depends upon competence in combat, using your character's skills to their best advantage, and tracking down the clues to solve the mysteries of Titan.

An update of Commodore 64 classic Mars Saga, this is a nice sci-fi RPG set on the moon Titan. Control up to 6 characters from various futuristic backgrounds to investigate strange happenings in the mines. Interesting skills and plot make up for the boring and repetitive combats. 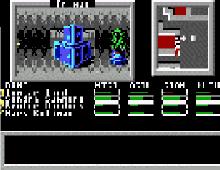