Another great roleplay game. You start be creating your characters. You can choose between many different races, classes, skills and much more. But in this game you don't have to create characters until you can't have anymore in your party. Because you can have any - yes any - in your party as long as you can convince them to join your party.

The game features many different ruins, dungeons and castles that you can explore. You can find many treasures, potions, spells and magic items. Not only does the game offer many things like equipment, but there are also many monsters and enemies in the game including many different animals.

When you start the game you don't really get any story, but sooner or later you will find about what the game is about especially when you solve some of the small quests in the game.

Legend of Faerghail was one of the most complex RPGs of the old days. With 6 magical classes, about 300 spells and the possibility of your weapons breaking in battle requiring a smith to keep them in top-shape (which was totally new at this time) you have to have a close eye on character-development. The game also is very big and - another new thing - it runs in realtime (which requires a slowdown-app on newer computers - I have attached one along with a setting that worked for me).

The story itself evolves around an uprising of elves in Thynn and a party of six adventurers (guess who...) being sent to investigate the matter. The gameplay very much reminds of the Bard's Tale series and you can also import characters from the first two parts, you can also import characters from Phantasie I and III, but I have to be honest and say I don't REALLY see the logic in that, I might miss a point there, but there seems to be a missing link somewhere... Anyway - if you like to sink into a well outlined fantasy world with a good story and some nice ideas that were only commonly implemented into RPGs years later (which also explains why not everything works that perfect yet) you can really have some fun with this game. Like in so many cases Legend of Faerghail is not suited for those who are looking for eye-candy. Even for 1990 the graphics are weak - might be a sacrifice to the complex game-engine.

A fun, detailed European RPG that could easily be the precursor of the classic complex RPG Blades of Destiny in its solid database of monsters, NPCs, weapons, and numerous quests. Combat model is also excellent, harking back to the Bard's Tale series where different classes have distinctive choices in combat. This game is certainly on many Amiga gamers' list of best-loved games of all time. 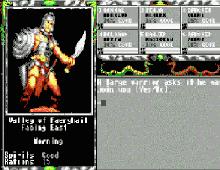 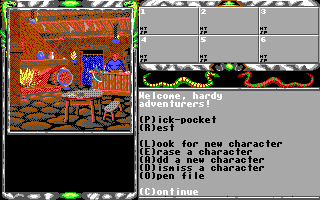 People who downloaded this game have also downloaded:
Knights of Legend, Lands of Lore: The Throne of Chaos, Dungeon Master, Wasteland, MegaTraveller 2: Quest for The Ancients