The third and best in the epic trilogy, Laxius Power III is one of the best freeware console-style RPGs made with RPG Maker 2000 program. Over one and a half years in the making, Laxius Power III offers a vast and very detailed gameworld that span over 1,100 maps, 150 quests (including about 100 side quests), over 500 monsters, 22 controllable characters - all of which add up to 150-200 hours of playing time. The game picks up where the previous game left off. The hero knight Random is reunited with his friends when they are invited by the king of Metrolia, the biggest town in the world. Naturally, all is not well: a mysterious evil aura is spreading, a sign that demons are inching toward their ultimate goal of replacing mankind.

Although language in the game is still quirky and inconsistent in terms of quality (English is obviously not the designer's native tongue), it is much better than the first two games. The ability to see monsters before you fight them (in contrast to most console-style RPGs) is nice, since it gives you a chance to run away before the encounter takes place. The quests are also generally interesting, and there are many plot twists along the way. The non-linearity of the game is great, and the ability to split your party to do different tasks (like the classic Magic Candle games) is a nice touch. Add to this the excellent graphics and many nuances (such as character-specific dialogues and quests), and we have a captivating RPG that will keep fans of console-style games glued to their computer screens. 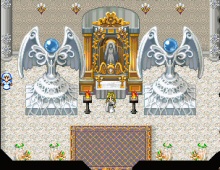 People who downloaded this game have also downloaded:
Laxius Power, Lands of Lore: The Throne of Chaos, Neophyte: The Spirit Master, Knights of Xentar, Druid: Daemons of the Mind