Laxius Power is one of the best fanmade RPGs I have ever seen. Although the plot is quite cliche, the game more than makes up for this with sheer size: not counting numerous side quests and secret locations, Laxius Power will easily take you more than 50 hours to complete.

Coded with ASCII's RPG Maker application, Laxius Power is a console-style RPG, which means you get to control a party of anime-style characters and explore a Final Fantasy-style world. The game lets you control multiple characters, and even allows you to change the difficulty level - a nice touch that more RPGs should have. One of the best things about the game is that you have considerable freedom of movement: there are always many locations you can explore at any given time - giving the game a strong non-linear feel.

Before you download the game, be warned: unlike most "cute" anime RPGs, this one has a number of "mature" elements that could offend you. There is offensive language and precarious sexual situations depicted, although nothing as blatant as the mildest of Japanese adult Hentai games. Also to the designer's credit, the sexual overtones never become the main focus of the game (it is normally quite obvious if a game designer is using sex as a 'cheap' gimmick to attract more players). The writing is awkward and stilted in some areas, probably a result of the game being translated from French, or coded by a non-native English speaker. That's nothing to detract from the fun, though. Overall, I find Laxius Power to be one of the best freeware RPGs today. If you enjoy console-style RPGs, check out this excellent old game that will occupy you for dozens of hours. If offensive material put you off, though, your best bet is to look for a more 'traditional' console RPG. 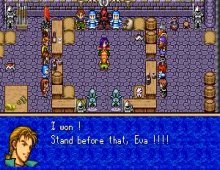