Harvest Moon: Back To Nature

Harvest Moon: Back to Nature is the superb sequel to Natsume's Harvest Moon for the Super Nintendo. Released for the Sony Playstation console, the game improves upon the "farmer's life simulation" formula set by its predecessor in every aspect, and adds many new gameplay elements that makes it one of the most replayable titles of all time. GameSpot's thorough review says it all:

"Harvest Moon: Back to Nature is surprisingly one of the most satisfying role-playing experiences to be found on the PlayStation. Instead of following the standard flashy FMV, save the world formula, Back to Nature involves you in the day-to-day tasks of running a farm, maintaining friendships, and building a family in a not too flashy but thoroughly involving manner.

The game brings you to your grandfather's farm, which you've recently inherited, in the sleepy town where you spent your vacation ten years ago. Offered a three-year trial by the mayor and the townsfolk, it is up to you to restore the homestead to its former glory and productivity, as well as earn the admiration and affection of the citizenry. These goals go hand in hand, as the citizens provide you with additional help and greater doses of love based on how well you've rebuilt your farmlands and how often you shower them with presents. A generous neighbor does well in Back to Nature, and only the most charitable of play styles will give you access to all that the townsfolk have to offer.

A great farmer needs a great wife, and wooing one of the local girls is one of the most enjoyable aspects of Back to Nature. With five girls to choose from, each with different likes, dislikes, schedules, and birthdays, it's a lot to keep track of. The quickest way to your chosen paramour's heart is by stalking her day and night, appearing at all her favorite spots, and showering her with gifts at every turn. At first, she may seem annoyed, even scared, but your constant attention will eventually turn her black heart a rosy shade of red on your love indicator, which is conveniently visible during dialogue. At this point, you may offer her a blue feather, as local custom dictates, and take her hand in marriage. Wedlock means no more late nights at the bar, more constant female attention, and eventually a baby.

Back to Nature has one of the most enjoyable sets of characters ever featured in a role-playing game. What makes them so intriguing are not their limit breaks, elemental bent, or how deep they are steeped in political intrigue. Instead, they each have relationships with each other, and those relationships are affected by your involvement with their respective friends and families. The characters are emotionally real, becoming jealous if you try to steal their girl, happy if you marry their daughter, sad if you turn them down for a date, and so on. Several of the characters in this seemingly simple game have fairly realistic characteristics, drinking themselves to sleep every night, running away from home, and participating in the local cockfights.

Several elements most other games would consider side stories or minigames play an important role in Back to Nature. For example, raising a happy dog, horse, and chicken not only provide you with benefits in the fields, but also at local competitions. You can win the local horse race, dog show, or chicken sumo competition with your animal companion. Once your house has a kitchen installed, there are over 100 recipes to be made using a combination of the crops you harvest and the utensils ordered over the home shopping network. Entering one of your more complicated recipes will surely win you the cooking festival, something sure to attract the attention of the ladies. While most RPGs reward experience with statistic increases, Back to Nature rewards you tangibly, with additions to your house, barn, and stables, opening up greater possibilities for profit and character interaction.

Comparisons to the N64 version released earlier [in 2000] weigh in quite favorably for Back to Nature. The game has been significantly improved with the addition of several different crops on a much larger farm, an easier statistic and rucksack management system, more enjoyable festivals, the wonderfully deep cooking mechanic, the harvest sprites, and so much more. Singing and voices have been added in a few rare occasions, and while the overall sound is of a generally higher quality than the N64 version's, it remains lackluster.

While impatient players may want to avoid the considerable time investment required, those looking for a game with hours and hours of highly addictive, nonviolent gameplay should find a cmfortable chair and a copy of Harvest Moon: Back to Nature. Be warned: You'll find yourself saying, "I'll play just one more day" more times than you can count."

This is by far the strangest mix of role-playing and simulation I've ever laid my eyes upon, yet it has a growing group of die-hard followers at its heels. This being the first time the Harvest Moon name has graced our beloved PlayStation, a new crew of gamers has the opportunity to be delighted by growing vegetables and raising cows.

During a summer of your youth, your vacation with your father was cancelled. His business kept him busy the entire season, and you were unable to spend time with him. Instead, you paid a visit to your grandfather's farm out in the country. It was different from life in the city, but had many interesting things nonetheless. As you grew accustomed to life where the air is fresh and the land is green, you met a girl. Together, the two of you sang songs and had merry times. When the time came for you to return to your father, you made a promise to her that you would one day come back. Now, that time has come. Ten years since that summer, your grandfather has passed away and left you the farm in his stead. This once-thriving farm has now become an ugly wasteland, and you have three years to bring it back up to its prior condition. During this time, there are many things to do. Aside from restoring your land with tools, crops, etc, you may grow interested in a significant other. The side quests and unique journeys you may encounter are vast and numerous, and each day brings with it new things to do and new things to see.

Everything in Harvest Moon: Back to Nature is based upon routine. Once you fall into the habit of doing certain chores each and every day, you realize you've become addicted to the charming gameplay. You begin the game with just under $500 and several tools, which are used to clear your farm of obstacles, such as rocks, weeds, and sticks. Be forewarned: The beginning is extremely slow-paced. If you're a Harvest Moon first-timer, like I was before this, it is easy to grow bored and frustrated. But stick with the game nonetheless, because there are some moments that are worth waiting for.

Being a farmer isn't easy. Now that you're all grown up with this farm to take care of, you realize that life isn't completely full of lollipops and candy canes. Every day, you have to wake up and take care of one task after another after another. In the beginning, your tasks aren't blatantly obvious, which can be confusing for those of us who have never touched this quirky series before. The first objective is to clear your land and begin farming. With only $500 in your pocket, picking and choosing the right things is important. Should you plant grass, or should you plant potatoes? It all takes careful consideration, because buying one item can make all the difference in the world, whether positive or negative.

The gaming world in Harvest Moon: Back to Nature is fairly small. In addition to your homestead and land, there is a tiny village with several shops, houses, and more. The surrounding countryside is forested and has mountains, which have mines. Exploring the entire area takes little time, but discovering all there is to do is unfathomable. During each month, there are special days where significant events take place. On holidays, village residents throw parties and celebrate with competitions. One in particular is a horse race, which you may participate in if you have an equine buddy. Always check the calendar to see which days are important, because participating means a lot in the end.

Of course, doing all of this can be a massive hassle. The more you accomplish, the more cumulative your daily chores. If you have a crop planted, you have to water it every single day. If you have animals, brushing them is also a requirement to take care of. Planning things out and strategizing will offer aid in case you're enthusiastic about meeting a girl and falling in love. Luckily, you have three monstrously long years to settle down and prosper. Until you can do that, Harvest Moon is a behemoth balancing act that has a deep learning curve with many endings and no truly right way to play. Try not to overwork yourself, though. If you work too hard without rest, you will grow fatigued and pass out. If this happens, you'll find yourself in the village hospital. This eats up valuable time, so watch your character's reactions to work carefully.

Think of Harvest Moon as a Tamagotchi pet. Then multiply the Tamagotchi by a few dozen, add in some unforseeable elements, and pour in ten gallons of daily repetition. Now you've got it. Winning a wife and turning your wreck of a farm into a rich manor is satisfying, to say the least. Naturally, you must have the desire to keep on playing through the boring parts until the real gems pop up. If you're able to dismiss the lack of action, Harvest Moon: Back to Nature should pacify your gaming needs -- unless you're like me, who craves game types of faster paces. 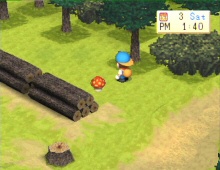 Harvest Moon: Back To Nature screenshot