A decent PC conversion of the Amiga hit game and sequel to Legend of The Sword, Final Battle features an interesting plot (you start the game as a prisoner of evil wizard Suzar, imprisoned alone in a dank dungeon), adventure-style interface (look, use, throw, etc.), and a good automap, although the parser is somewhat inferior to its predecessor and the plot less attractive. Although the graphics is grainy and the gameplay involves a lot of pixel-hunting, it's still an enjoyable little RPG. 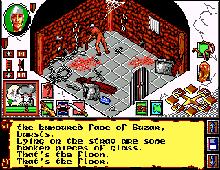 People who downloaded this game have also downloaded:
Entomorph: Plague of the Darkfall, Druid: Daemons of the Mind, Knights of Legend, Dungeons & Dragons: Warriors of the Eternal Sun, Crystals Of Arborea