Evets is a decent Roguelike game that is not as good as the fuss around it seems to suggest. Trav's review says it all:

"Honestly, when I took my first look at this game I don't know what the fuss was about. But as I delved deeper I saw that it offers some unique ideas. The first thing that you'll notice is that the main menu and character creation interface are terribly unintuitive. There is no in-game help; you have to read evets.man to be able to to anything at all.

It's a multi-character game; you control a party. This is a unqiue idea, except that it is poorly implemented; inventory management and combat are much more difficult that in other Roguelike games. Casting spells is a pain; you have to type in the complete name of the spell and it doesn't help that there are misspellings in the anme [e.g., Magic Missile]. For that reason, and the fact that hitting "ffff" in combat is easy, I suggest you create four fighter characters as your first party.

Once you get past the interface deficiencies you will notice stores and unique locations inside the dungeon. These are what gave me hope that game would offer something positive. I've found a review board, a barter shop, and then... nothing. There weren't even items in the deungon to pick up. Just stairs and pits and monsters. You ran run away from the monsters, by the way. And I never had characters starve to death. Also, the dungeons don't appear to be random.

The bad interface cripples the game. Most players will probably give up before seeing much of the game at all. If I didn't have to review it, I would have deleted it before you can say, "Heroes of Might and Magic 3 is calling." Even so, I only took the game for quick test drive, maybe an hour or so of playing.

It seems like the game was still in the early stages of development when it was abandoned in 1988. Since it hasn't been touched in over a decade I decided it would fit better in this Review section than in the Preview section. Personally, I find it overall to be unattractive and not fun to play." 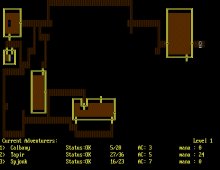 People who downloaded this game have also downloaded:
Dungeons of Morabis, The, God of Thunder, Caverns of Xaskazien, Dusk of the Gods, Galdregon's Domain