Galdregon's Domain is a fun dungeon-crawl epic that makes up for its lackluster plot with good gameplay and a vast gameworld to explore. The premise is as clichť as it gets in this kind of game: the dead evil wizard Azazael has risen again as a powerful Lich, retrieved the five gems of Zator, and hence enslaving mankind. You are a freebooter barbarian who-- naturally-- was commissioned by the King to retrieve the five gems and return to the King. Zator's fate rests upon your shoulders as you venture forth into the unknown lands....

Although it has adequate graphics and some interesting monsters, Galdregon's Domain degenerates into a sub-par RPG due to several flaws, the most glaring of which is the lack of automap. You will spend hours just trying to navigate a friendly town, let alone interminable mazes in the Lich's castle. Expert RPGers might shrug and say, "so what? Mapping is a norm in RPGs." Yes, but this isn't Wizardry which really compels you to happily map one area after another. The plot in Galdregon's Domain is weak, derivative, and never gets better. People you must talk to always move around in real-time, and since most scenes look alike, it can take forever to find that one wizard again. (Note: The graphics is much better in the Amiga version, though.)

To the game's credit, it does offer some fun platform-style combat. Each Gem is guarded by five powerful creatures, and you must learn their strengths and weaknesses in order to defeat them. The encounters with these creatures are always exciting, and defeating them truly give you a sense of accomplishment. But you'll need patience and time to see these events in this uninspiring solo-player RPG. Only play it if you really can't think of anything better. 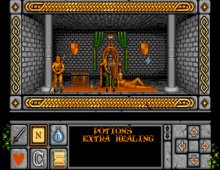 People who downloaded this game have also downloaded:
Knights of Legend, Dungeon Master, Hexx: Heresy of The Wizard, Ishar 1, Moonstone