Dusk of the Gods

This is the forerunner to classic The Summoning. I actually like the plot of this game more than its descendant's, even though it has more outdated graphics, small figures that are hard to see, and repetitive puzzles (most of the time you'll feel more like a messenger for the Norse gods than a hero). Anyway, the plot, which is steeped in Norse mythology, is about your attempt to avert the inevitable fall of the gods at Ragnarok, the "final battle" between good and evil. Good game, if a bit trying at times due to an awkward interface. If you like RPGs based on mythology, though, Dusk of The Gods is one of the best there is. The game is also much longer than average RPG, as you always have innumerable chores to run for various gods. 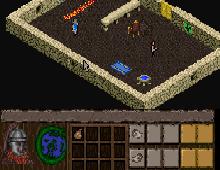 Dusk of the Gods screenshot

People who downloaded this game have also downloaded:
Betrayal At Krondor, Entomorph: Plague of the Darkfall, Druid: Daemons of the Mind, Escape from Hell, Eye of The Beholder 2