The Dungeons of Morabis is a decent freeware Roguelike designed by Michael Hoenie in 1992. Your quest is to find the Amulet of Sae'Gore. During that quest, you will learn magic spells, fight boss monsters, and search 28 different maps. Originally a shareware game, the author has released the game into the public domain.

The Dungeons of Morabis is not that different from other Roguelikes, except that the real-time gameplay makes the game more unique. The levels are also not random: every time you start a new game, the only things that will be different are the monsters and items, which are spread randomly throughout the dungeon. The layout remains the same, which means once you beat the game, there is little reason to go through it again.

Which is not to say that you will even be encouraged to finish the game in the first place: a very annoying "feature" in TDoM that you have to hit SEARCH button numerous times - because most of the levels are hidden behind either secret doors and illusory walls. This is bad game design, which goes to say that the only reason I put this game up here is because the real-time feature makes it one of the more unique Roguelikes. File this one under "deserve some notice, but game status well deserved." 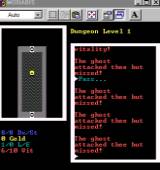 Dungeons of Morabis, The screenshot