Dunzhin is the first and probably final game in the slated Warrior of Ras RPG series. The game itself is a fairly typical dungeon crawl with absolutely no plot whatsoever: your only objective is to explore the dungeon as deep as you can to seek an ancient artifact, and stay alive in the process. What makes the game special is on the technical front: it seems to contain an actual Z80 emulator, and includes digitized speech - an astounding feat for a 1982 game (yes, 1982 - years before the advent of AdLib card, let alone the SoundBlaster).

Primitive as the game is, it shares the same "just one more level" appeal as oldie Roguelikes from the same period - the earliest versions of Moria and Rogue itself come to mind. If you enjoy good old hack 'n slash, check out this ancient but technically ahead of its time RPG that ranks among the oldest of them all. 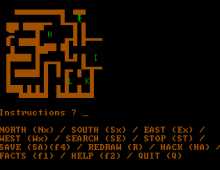 People who downloaded this game have also downloaded:
Quarterstaff: Tomb of Setmoth, Dungeon Hack, Escape from Hell, ZangbandTK, Entomorph: Plague of the Darkfall