Darkspyre is a mix between an action and roleplay game. You start the game by creating the character you want to play as. Now don't get too excited since you can't really choose between much in the end. The actual game starts in a dungeon where you can walk around and pick up different items like potions, magic books and a wide selection of weapons.

The actual combat in the game is poorly done simply because of the controls in the game. You have to stand very close to things including your enemies and face in the correct direction. Nothing wrong about that but sometimes your character simply doesn't' turn around and that is a bit frustrating since someone is knocking you out at the same time. When the combat does work though it's easy since you just have to click on a few buttons to attack. Items can be equipped quickly by pulling up the menu and move the wanted item on to your character.

The graphics in the game are standard for 1990 but I like the character/inventory menu as it's easy to get a good overview of what you have in your possession. While the combat in the game is a bit too simple there are some good puzzles in the game so you should be able to enjoy Darkspyre even when you take the poor controls into consideration.

Dreamforge's first game as Event Horizon is a solid overhead RPG that deftly combines real-time action and physical puzzles (e.g. traps, switches) with traditional RPG gaming. The plot which involves arcane artifacts and the usual big-foozle-out-to-destroy-the-world setting, starts out cliche (you are chosen to enter DarkSpyre, an evil stronghold) and quickly picks up the pace. It's a good game, with innovative story-based character creation system that would become Dreamforge's hallmark in subsequent RPGs.

Action roleplaying game. Walk through dungeons. Gameplay is seen from above. The gameplay is good as are the graphics. 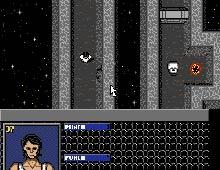 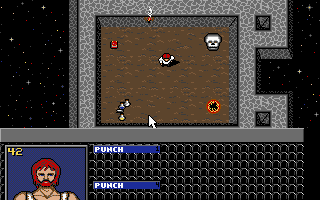