A revolutionary RPG that is largely forgotten, The Colony pioneers many concepts that are now familiar to most RPGers: fully rotational 3D gameworld, real-time action, digitized sound effects, and mouse-controlled movement. Your task in this sci-fi RPG is to rescue six children from a destroyed colony, then make it back to your ship and destroy the planet overrun by aliens. Despite shaky 3D effects and static 2D bitmapped view for most interaction scenes (opening drawers, etc.), The Colony is still a fun and highly innovative game for its time. 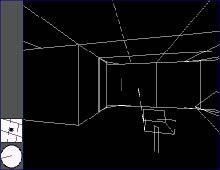