The sequel (Chaos Strikes Back is between Dungeon Master and Dungeon Master 2) to the great classic roleplay game Dungeon Master. Some people have regarded this as just an add on to the first Dungeon Master but really should be considered as a new game even though the developers of the game have decided to stick with the same game engine. Can't argue against that since Dungeon Master was quite popular and still is. But other than keeping the game engine the game interface is also the same and as with all games in this genre up to the first game in the Lands of Lore series you can easily control your character actions, inventory etc. fast with either your mouse or keyboard.

Chaos Strikes Back is not as large as Dungeon Master so you might think you can complete this game a bit faster. I don't think you can since the game level is a good part more difficult so you will without doubt spend more time on each level. But it is of course also expected that you have already completed Dungeon Master with this game being a sequel. It's also recommended that you do this since you might otherwise miss parts of the story in the game.

With the improved graphics, slightly improved game engine there are of course new monsters, items and maybe most important - new puzzles. Each of them similar to the ones seen in the first game but all are slightly tougher. This is of course only expected. Overall a great game and for true roleplay fans this game offers a lot of great gameplay and Chaos Strikes Back shows how a dungeon crawler needs to be. With the minor improved graphics and sound this makes it a worth sequel to FTL's popular Dungeon Master.

Lord Chaos - big bad guy from Dungeon Master - is back! Again you got to make your way through a dungeon to defeat him. The dungeon is divided into four parts - one for each class. The part for the fighter contains puzzles that have to be solved using strenght, the mage's part needs the right use of magery and so on. In general the gameplay is the same as in Dungeon Master - the game is just a LOT more challenging. Just after starting the game you got to act fast or you're eaten by ugly hungry creatures. The game is hard - don't think you can solve it on an afternoon!

Chaos Strikes Back came with a lot of new features like an editor for the character images and an oracle. As this version is an amateur port of the atari version you shouldn't rely on it though. However apart from a few crashes in the editor part everything seems to work fine and you can see that Paul Stevens - the guy who did the port - got some serious skills. The game is meant to be run in Windows though and I do not know how happily it will run on older systems. On MY system it was a very nice thing and I can highly recommend it. I might also add that my favorite (german) gaming magazine (Power Play - but only with the 1990 crew!) gave this game the highest rating (94%) in 1990 (which also happens to be my favorite year in gaming history).

Excellent sequel to Dungeon Master, one of the best dungeon crawls of all time. In Chaos Strikes Back, the original game system is continued in a quest packed with the finest heads-up-display (first person perspective), real-time role-playing. The award-winning artwork was carried over, and there are ten levels of beautiful graphics, bone-chilling action and the same kinds of puzzles that we love to hate. The game begins long after Dungeon Master ended (where, thanks to your help, the White Wizard was reunited with his other half, the Lord of Chaos, to form the Grey Lord, your master and mentor). In Chaos Strikes Back, the aging Grey Lord has been severely beaten and Lord Chaos is one again separated from the Grey Lord. Lord Order, the White Wizard half of Grey Lord's being, still resides within him. Before Lord Chaos was fused (at the conclusion of Dungeon Master), he built a secret dungeon under the valley of Viborg and created a Forge of Fulya to produce for large chunks of corbum. The corbum's power shakes the foundations of the Grey Lord's castle and will eventually kill him. Hidden in a pillar surrounded by a sea of death pits, each piece can be accessed only by completing four dangeous mazes based upon the four ways: Warrior, Ninja, Wizard and Priest. The only way to destroy the corbum is to find the Ful Ya Pit and throw it in. So off you go, in search of four hardy souls to explore another deep, dank dungeon...

Fans of Dungeon Master will be right at home with Chaos Strikes Back. FTL clearly took the saying "if it ain't broke, don't fix it" literally: the game looks and feel exactly like its predecessor, which means you are in for another countless hours of addictive role-playing. As in the first game, you use a combination of mouse and keyboard controls to interact in the game. Encounter squares and menu options are replaced by click-on buttons and actual pictures of the monsters as you approach them, or they approach you, from a distance. To run, you merely turn your character around and move away from the monster. Items and spells fly through the air and can be dodged. And objects stay put when you drop them on the floor or place them on shelves, adding yet another realistic touch.

Chaos Strikes Back is smaller than Dungeon Master, with only ten levels instead of fourteen. But it is decidedly much more difficult. While the puzzles in Chaos Strikes Back are similar to Dungeon Master (mostly physical puzzles involving wall switches, floor pressure plates, etc.), they are more complex this time. For example, in addition to using the correct keys in one situation, you must also press multiple buttons on different levels. Monsters are more powerful, more intelligent and less predictable, making the old trick-monsters-to-step-on-pressure-plates-for-you strategy you used in Dungeon Master a lot less efficient and more dangerous. The locations of artifacts and items are randomized when the game is loaded, making some almost impossible to find, even with hints. Some walls are also shuffled, making it difficult to follow directions and maps made by other players (but I have heard of people who completed it without maping at all!). You can import your party from Dungeon Master, or create a new one from scratch by choosing party members from the same two-level starting maze as in the first game.

Overall, if you love RPGs, especially tough ones, Chaos Strikes Back is a must-have. It has everything Dungeon Master has, including the addictiveness. Dungeon Master veterans in particular will find Chaos Strikes Back a fittingly more challenging game after their last round of dungeon-crawling. Best of all, the PC version of game is now available for Windows, thanks to the tremendous effort of Paul Stevens, who spent more than 1,000 hours to disassemble the original Atari ST code, and converted it to C++ on PC. Thanks to him, PC gamers now have a chance to enjoy this RPG classic without needing any Atari ST emulator. Too bad Mr. Stevens has no more time to convert my perennial Atari ST favorite Sundog to PC version too -- here's hoping that some programmer somewhere will be inspired by this and try to do it ;) 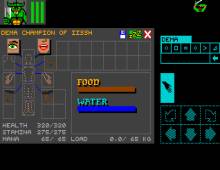