Some interesting info on this obscure Roguelike RPG from Balrog's page:

"Here's an obscure Telengard clone for the PC, possibly written before Telengard itself was ported to MS-DOS. Released in 1984. Telengard-like in most ways, a historical footnote.

[The author's response]: For what it's worth, this started out as a TRS-80 game, Dungeon of Mirandor, which never quite made it out. The TRS-80 market fell off a cliff about the time I finished it. Mirandor owed a lot, conceptually, to the DEC VAX 11/780 version of Telengard, which I'd played extensively around ?1983?. Zoarre was an expanded version, finished painfully at intervals over the course of a year or so. The "fight" handler was unduly tedious to program, and balked me for too long.

I wrote Zoarre using the IBM BASIC Compiler, a renamed version of one of Microsoft's early BASICs. The compiler went through DOS and BIOS services for I/O, and was so unspeakably slow at updating the screen that I had to write assembly language routines for direct screen writes. Plus, it didn't support the new DOS 2.0 features like subdirectories... albeit this wasn't a major issue on the typical floppy-only system of the time. Anyway, the assembly language routines eventually made it out as a separate product, AdvBas, which was far more successful than Zoarre. AdvBas later went commercial, and started me on my career in writing tools for programmers.

But, that's certainly a great deal more than you wanted to know. Anyway, it's nice to have a copy of Zoarre again. 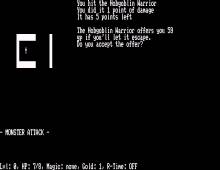 Caverns of Zoarre, The screenshot

People who downloaded this game have also downloaded:
Caverns of Xaskazien, Castle of the Winds, Betrayal At Krondor, Bloodstone, Buck Rogers: Countdown to Doomsday