One of the dungeon crawlers that never got the attention is deserved. The game is very simple where you start by creating your character and move into the dungeons at once. The interface is badly used leaving up a lot of emtpy space on the screen. I can't really see the point with why they made it like this.

The game consists of the usual features and there are many places you can explore in the game. This game is worth a try if you like dungeon crawlers or roleplay games in general.

This PC conversion of an Amiga dungeon romp didn't fare as well as the Amiga version, despite its being an excellent RPG that allows 2 players to play simultaneously. Innovative spells, cool monsters, good interface, and pleasant graphics make this a severely underrated RPG that deserves wider recognition. Too bad the data disk was never ported to the PC. Also check out Hexx from this site, another solid RPG from the same designers that is essentially Bloodwych with better graphics.

Bloodwych is a dungeony, mazey, party-based RPG in the style of Dungeon Master (aren't you glad that you know what i'm talking about?). It has a more dumbed-down feel to it than dungeon master did, the puzzles are either entirely based on combat or are painfully simple. Also the magic system has been dumbed-down and now relies on colour codes (remember the runes from dungeon master?) - the whole game has an arcadey feel and just isn't as rewarding as Dungeon Master.

The one welcome addition is a split screen two player mode, where each player takes control of a party of four characters. However, this does mean that the already poor quality of the graphics is greatly reduced when they squashed down to a smaller screen. 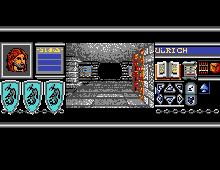 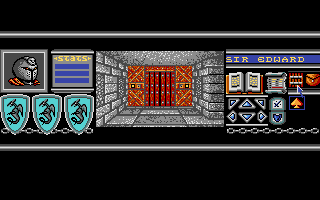 People who downloaded this game have also downloaded:
Chaos Strikes Back, Captive, Dungeon Master, Eye of The Beholder 1, Lands of Lore: The Throne of Chaos