Amulet of Yendor is a cheap rip-off of Rogue, included as part of Keypunch's Swords and Sorcery package. The plot is straightforward: go into a castle to retrieve the magical Orb of Yendor. Anyone who has played Rogue (or later derivatives like NetHack) will immediately recognize the name Yendor and gameplay elements, although Amulet of Yendor does have some interesting features that are not commonly seen. These include the ability to transport (once you find the RuneStaff), gaze into the crystal ball (50% chance of seeing the truth), and using a lamp (allows you to look into one adjacent room). Other than that, the game is quite a straightforward Roguelike with little to recommend it. There are only 12 kinds of monsters, 3 spells, and that's about it. Worth a look only if you collect Roguelike games.

Another text RPG based game. This one is actually in ansi colors :) The game has some Rogue like features and some more interesting stuff you can pick up in castle where you are wandering. 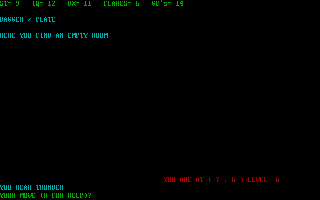