2400ad is an RPG that is set in a future where an alien race called Tzorgs rule. You have to escape but the area is constantly patrolled by robots which can take away all your items or put you in jail. You can talk to the locals and sometimes they can help you. This game doesn't come with a txt file manual so you have try out a few buttons before you get the hang of it. I didn't really enjoy this game but its prob due to the awkward key commands. Its an EGA colour game and it runs in Windows 98.

In Origin's first science fiction RPG and a precursor to Space Rogue, you are chosen by the beleaguered resistance on planet XK-120 to lead the revolution against sinister robot oppressors. Restore freedom to the city of Metropolis by fighting robot enemies, explore cities, and find a way to disable the robot's central control. The skill-based gameplay foreshadows Interplay's classic Wasteland, although much more simplistic. Overall, a noble effort for its time that would soon be surpassed by better descendants, although the game's humor and fun gadgets would keep you enthralled for hours. This game also deserves notice as Chuck "Chuckle" Bueche's first design for Origin. 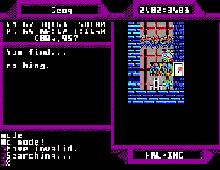