Akalabeth, or so called Ultima 0, was the game that started the Ultima saga. It was actually never made for PC so this is a version that came with the Ultima Collection released by Origin in 1997.

The game is written in Pascal so the graphics and sound are pretty crappy. The game itself is nothing special, but hey! Look at the year when it was made! You can select either a mage or a fighter and head to the dungeons in search for wealth and glory. The dumb thing is that you have to care about the food supply all the time...

Richard Garriots first game, as far as I know. By now Origin likes to see Aklabeth as the first game in the Ultima-series. They call it Ultima 0 (if you don't believe me and think I came up with it myself, go on and take a look at their Homepage). Well now as you can see, Aklabeth comes with full detailed 2-color graphics, along with some explaining text-passages on the lower side of the screen. ;-)

It's really a game that's nothing for the weak-hearted, coz' there are no colors, or anything near to graphics. If you like one of the old style (and I mean OLD style) RPGs, then this is your choice - all of the others: go and get a newer Ultima!

Akalabeth Remake is an excellent fan-made remake of Akalabeth, the game that marks a true beginning of Richard Garriott's famous career as one of the world's best known designers. The plot is pretty simple, but does set the stage for Ultima games which would be based in the same fantasy world: you must go and defeat the Dark Lord Mondain to free the world from terror and chaos. The game is split in two sections. The overworld is a place where you roam to find towns for supplies and a dungeon to defeat evil creatures. The underworld is a pseudo-3D view of a cave with little graphic monsters made out of white lines (and very ugly looking). Simply put, it's a typical dungeon romp similar to the early Wizardry games, but a lot more simplistic.

Richard Garriott fondly recalls the old days in an interview with CD Mag : "It really is Ultima 0. Literally, if I go into a dungeon, the exact same code is used in Ultima I. The only thing we added was the bitmapped graphics for the outdoor areas. I created Akalabeth for me, in the summer after my senior year in high school when I was working at a ComputerLand store. The owner convinced me to self-publish the game, so I went out and produced 200 ziplock bags, coversheets and printed manuals. None of these have disks because they were expensive, and I'd only copy them when I needed them. I created 16 of them, and sold 15 in the store. Then a publisher in California got hold of it and purchased the publishing rights."

As it turns out, "the publisher" is called California Pacific, and it sells 30,000 units of Akalabeth. Considering that many new games nowadays don't sell even close to this number, Garriott's success is remarkable. Originallly released for the Apple II computer only, the game was later ported to PC, enhanced from black and white to 4-color CGA graphics, and included in the Ultima Collection compilation.

This fanmade remake sports many enhancements over the original black-and-white-stick-figures version, even though they are bells and whistles that have no bearing on actual gameplay. A lot of new EGA graphics have been added, including a title screen, outside graphics, intro, ending, and color to dungeons and monsters. There are .WAV sound effects, MIDI songs, and even a setup program to toggle sound on and off. Overall, the enhancements make Akalabeth much better looking while keeping the fun (if simplistic) gameplay intact. Definitely worth a look if you want a nostalgic walk into the famous designer's past but don't want to put up with his ugly drawings ;) 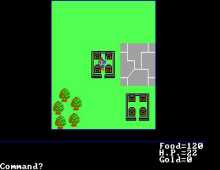