Very primitive early text-only RPG, The Wizard's Castle is another release by IPCO, the world's first publication for PC. From MobyGames' description: "...A long time ago, the great wizard Zot forged an orb of power. He soon vanished, leaving behind a vast castle filled with monsters, traps, and great treasures including the orb of power. You play the part of a bold adventurer in search of the orb of power and whatever other treasures you can make it out of the castle with. Gameplay is similar to a text adventure game. Simple commands are used to move from room to room, consult a map, or look around. Many times though you need only choose from a several options for the current situation, such as during battles. There are vendors you can trade with, mystical pools which can give or take away power, warps to far parts of the castle, numerous monsters to fight and assorted treasures to find.

The Wizard's Castle was originally written for the Exidy Sorcerer and later ported to the IBM PC."

As far as 1981 games go, this BASIC game is not that bad. But unfortunately compared to the marvel that was Infocom's contemporaneous Zork, The Wizard's Castle pales by comparison. Worth a look for text adventure enthusiasts, but only as a historical curiosity that doesn't stand the test of time so well. 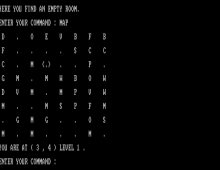 People who downloaded this game have also downloaded:
221b Baker Street, Jeopardy! 4th Edition, Elite, Legacy of The Ancients, Hitchhiker's Guide to the Galaxy, The