Where in the World is Carmen Sandiego?

You play the role of a detective, whose aim is to solve the crimes that Carmen's gang commits. The job is not easy, it requires a bit of brain power - chasing the criminals all over the world, to different countries taking you to the airport, library, dock, markets, etc. As you solve more and more cases you earn a higher rank by getting a question right to be worthy of the promotion. You don't actually come up against Carmen Sandiego till the very last case but its all worth the wait.

Where in the World is Carmen Sandiego was one of my favorite games as a child. I loved the history and general knowledge questions and, of course, having to find the criminals. The ranking system was fair and the robot cop was hysterical. My favorite part was trying to catch the criminals without the case book telling you everything about them. I also enjoyed the random-ness of the witnesses, their accents and traditional garb. The music was accurate as you travelled the country and I even learned a little bit about world culture. Everything in the game was just great fun. The pictures of the places were stunningly beautiful and vivid. The creators obviously put a lot of thought into who all the characters were because they were all very well developed. Right down to the small village merchants. I used to watch Where In the World is Carmen Sandiego religiously when it was a TV show and I was so excited on the day when I walked into Ames (Yes, there were stores before Wal-Mart.) one day and there was this great game just sitting on the shelf waiting for me to take it home with me. At least weekly, I would pretend I was deathly ill so I could stay home from school and play Where in the World is Carmen Sandiego all day long without interruption.

In the game, you are a detective trying diligently to find Carmen Sandiego, the world's most wanted criminal ever. You are also sniffing along the trail of 10 or so of her closest criminal cronies, as they cross the world in a matter of a few hours. The travel agent alone is worth the trips. You're given clues, witnesses and an unlimited expense fund to track these dirt bags from Southern California to the Continental divide. The only catch is that you have to catch them in a certain amount of time, so you had better hope that your pilot has not been drinking. When you finally have enough evidence to arrest a suspect, you have to obtain a warrant, or you don't win the cat style, boot throwing, scratch fest that precedes a "court hearing" after you have a suspect in your custody.

These people steal everything that they can find of value, up to, including, but not limited to the Hope Diamond, the Great Wall of China, and even the Ambassador of Denmark himself! They are also very cunning and tend to break right out of jail if left alone for even a bite of a donut. So keep your eyes peeled!

Good luck in becoming the greatest detective of all time. This game is very addicting and will definitely have you asking, "Where in the World is Carmen Sandiego?" 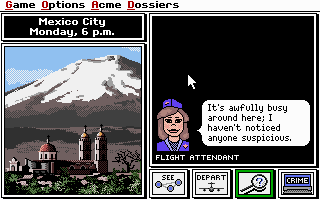 Where in the World is Carmen Sandiego? screenshot