Perhaps the best way to describe why I think this is THE most complicated Tetris clone of all time is to describe how the game works. The playing area, i.e. the tube, consists of 16 rings, each comprising 48 gray block. The rings are divided into six arches (of 8 blocks each) and each arch has its own color which is defined by the color of the corresponding arch on a colored ring of the tube wall. Blocks of various shapes and color, as in Tetris slides down from the center of the tube towards the outer wall. Your job is to rotate them around the tube to "clear" the blocks by completing a ring.

What makes the game more difficult than it already is, is the requirement that you must make a ring made out of blocks of the same color to make it disappear. On top of this, the speed of falling blocks increases exponentially with each new level. If you're a Tetris expert who prides yourself on having beaten every variant in existence, Tubis is a perfect challenge. For the rest of us, though, the game is simply too difficult to be fun for more than a few minutes.

The best way to describe Tubis is to say that it is the most complicated Tetris clone ever made. The tube in which the game is played is made of 48 blocks divided into six arches (of 8 blocks each) and each arch has its own color. To make a line disappear you need to collect 8 blocks of the same color in the line. It might sound fairly easy but it's far from that.

People like to say that Tubis is the final Tetris level and whoever can beat this game can easily be called the Tetris master. I wish you good luck! 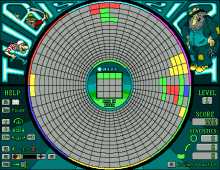