Symantec Game Pack is an above-average collection of 6 mini-games written by Charles Timmerman and published by Symantec in 1991 for Windows 3.1. All six games are computerized versions of common parlor games, some not usually seen in a PC game (Jacks and Smart Dots). The games are a nice mix of action, puzzle and strategy: Jacks (typical pick-up-the-jacks-and-catch-the-ball game a lot of people play as kids), Memory Blocks (a straightforward memory game), Pick Up Sticks (another game I played a lot as a kid, where you must pick up one stick at a time from the random pile without moving others), Hangman, Smart Dots (an interesting and more complicated variant of Tic-Tac-Toe), and Code Breaker (a straight clone of deduction game Mastermind).

Overall, Symantec Game Pack is a decent collection that is fun for short coffee breaks, although the quality of games is inconsistent: I found Smart Dots and Hangman quite interesting, but the rest only marginally above average. Worth a look if you're looking for some short games to play at the office. 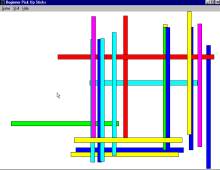