Super Gem'Z is a fun puzzle game by Kaiko, a short-lived German developer who released several games for the Amiga before disbanding the company in 1993. A mixture between Gem'X, Kaiko's previous game, and Bomberman, your goal in Super Gem'Z. Dozens of levels, power-ups, and colorful anime makes this a highly underrated classic. If you like the original Gem'X (on the Amiga only) or Bomberman, you will find Super Gem'Z a fun diversion. An interesting historical anecdote: this DOS version was never officially released, although it was coded by Marc Kamradt and Matthias Wiederwach. Later on, VME used the idea in a Playstation game called Inspector Gadget: Maze Panic. 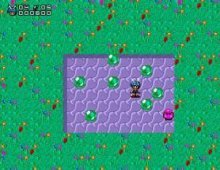