The first Star Trek trivia game in existence is also interestingly the very first shareware game Apogee released-- in 1986. Despite archaic text-based interface, the game stands up well with time, featuring dozens of questions related to the original series that range from the common to the obscure. A good way to show off your Trekkie knowledge to friends. 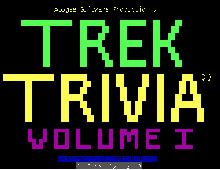