One of the best Lemmings clones I have ever played and certainly the funniest, Shoujo Attack! is a great Lemmings clone that manages to parody Japanese anime/manga culture in the process :) Your job: guide little "shoujo" ("girls" in Japanese) from the entrance to the exit in each level.

Instead of using typical Lemmings skills, you will assign various 'tasks' to the shoujos. These tasks are all based on features found in anime/manga titles, and are all very funny. For example, instead of pickaxe-carrying lemmings, you have Samurai shoujos, Cat shoujos, Fighter shoujos, and Mecha Pilot shoujos who can cut, claw, and blast their way through obstacles - and that's just for starters. Instead of digger lemmings, here you use Demon shoujos to blast holes beneath her. To create bridges and platforms, you can use Chef shoujos, Artist shoujos, and Flower shoujos who make bridges out of long noodles, paint, and flower seeds respectively. Even funnier are the Fanservice shoujos and Airhead shoujos who - well, play the game to find out ;) On some levels you can also give skills to the shoujos - such as Ninja, Android, and Airhead. These skills are not for one-time use like tasks, but permanent for that level (unless you give them a new task or skill). Another funny touch is that instead of bomb (which splatters all the lemmings in Psygnosis' game), you have tentacles as a way to give up ;)

Level designs are good throughout, although they are much more forgiving than the hardest levels in Lemmings. There is no hunt-the-pixel headache here: as one of the tutorial levels points out, if you are frustrated with trying to use a task at the precise spot, that mean there is a better way of winning the level. I have only one quibble with the game: it plays too fast on my computer - there is an option to speed up the game, but not slow it down. Fortunately, the pause button helps a lot. If you love Lemmings, puzzle games, or anime style in general, Shoujo Attack! is a must-have. It may not be as creative or original as Lemmings, but the very funny tasks and decent level designs make the game a really clever parody that is also addictive to boot. 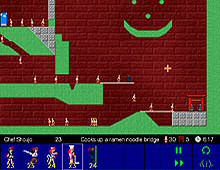 People who downloaded this game have also downloaded:
Lemmings 2: The Tribes, 3D Lemmings, Lemmings for Windows 95, Lemmings Chronicles, The (a.k.a. All New World of Lemmings), Lemmings Paintball