PuffBOMB is a unique and fun puzzler by a lone programmer, coded as an entry in the third 48-hour game competition at Ludum Dare. The game plays like a stripped-down, tiny version of The Incredible Machine: get the hamsters to the exit area(s) on each level by placing bombs strategically. Bombs that explode will propel the hamsters in one direction. The laws of physics apply here: the farther away you place the bombs, the less impact it will have on the hamsters' speed; the location of the bombs determines the trajectory of the hamsters' flight.

Although it sounds like nothing more than a fancier version of Lunar Lander, there are several tweaks that make PuffBOMB more challenging - and interesting. You not only can place bombs, but can also adjust the fuse length, as well as the interval (in seconds) between each explosion (in case you place more than one bomb). Choosing the right interval and fuse length is crucial to success on the higher levels, especially ones where you must send multiple hamsters to separate exit boxes.

Given that it was coded within 48 hours, the game's unique gameplay and polish is a remarkable achievement, and the many dozens of levels will keep you entertained for many coffee breaks. Although the game could use more devious level designs to make it a more "brainteaser" kind of game (think D.R.O.D.), PuffBOMB is fun enough to keep you playing to see what the next level has in store. Recommended, especially to fans of Lunar Lander, Microsoft's Gorilla... or just the laws of gravitation ;) You can also design new maps with the included map editor. 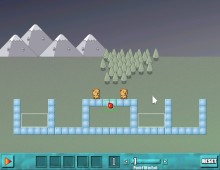