Nano Tank is a little-known gem for Windows that features cleverly (some will say fiendishly) designed levels and electrical components. The goal in each level is simple: maneuver your nano tank to the exit. The method, however, is arduous: you must power on the exit, and manipulate devices such as batteries, switches, and and relays to form a powered track for the tank. You must also avoid a trace bug, which moves along traces and can destroy your tank. It's not as elegantly designed as Elements , which is based on similar concepts, but is still a a fun and challenging game with a neat plot (destroy alien computer) to boot. 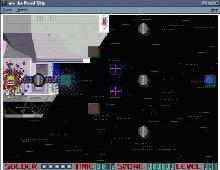 People who downloaded this game have also downloaded:
Enigma (2003), Wasteland, Lost Vikings, The, Dune 2: The Battle for Arrakis