Military Puzzle is a good collection of 4 brainteasers from NZP. From the official page, this is "...a collection of four classic puzzles, set to a military theme. Find the safest placement for airplanes on an airfield, decipher the enemies' code, avoid enemy fire as you retreat through the trenches, and help allocate the correct number of weapons to your tank column. The puzzles range in difficulty from easy to moderate."

As the official description suggests, all four puzzles are classic puzzles represented in military theme. In 'Air Attack,' your goal is to arrange eight planes on the airfield so that no two planes line up on the same horizontal, vertical, or diagonal line. 'Secret Code' is a moderately difficult math puzzle that asks you to type the next string of numbers based on a given sequence. 'Weapon Allocation' is a math puzzle: you must distribute the shells among the eight tanks so that the sum of the shells in each pair of squares equals the number located next to the squares. This is more challenging than the first two puzzles.

The last game is 'Behind Enemy Lines,' the most elaborate - and my most favorite - puzzle in the game. Your goal here is to make the blue and yellow snipers exchange places on the board. You can move the snipers one at a time in any order, along the trench lines from point to point. But there's a catch: a blue and yellow sniper may never stand at once on the same straight line (i.e. opposing snipers can not occupy the same line of fire). Like other puzzles in this game, though, there is no replayability because once you solve it, you have seen it all. Although to be fair, these puzzles are 'set piece' kind of brainteasers that work because of their specific set-up. With good graphics and clean interface, these 4 puzzles will entertain you for quite a while. 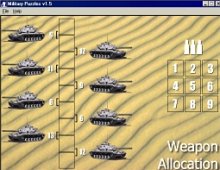